Chopta – The Mini Switzerland of India 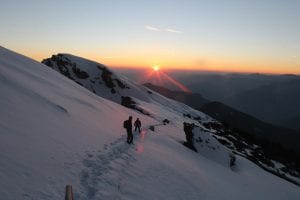 Chopta valley is a small region of meadows and evergreen Himalayan temperate forest, a part of Kedarnath wildlife sanctuary in Uttarakhand. Chopta Hill Station rapidly being popularized as a tourist destination among all aged and type of tourists across the country and around the world.

For Nature lovers and trekking enthusiast, Chopta is must visit destination because of its untouched, unique and simple scenic beauty. Its tranquility, greenery all around, and beautiful panoramic scenic view of snow clad lofty Himalayan peaks are innately heart taking.

Chopta is the commencement point of the trek to Tungnath -3rd Kedar. Another 1.5 km trek frm Tungnath leads to Chandrashila(4000mts above the sea level) Which offers a panoramic view of snow clad Himalayan peaks including Chaukhamba, Trishul, Nanda Devi, Pancha chuli and many more (more than 20 peaks).

WHY VISIT CHOPTA– A BEAUTIFUL HILL STATION ON INDIA

Chopta valley has been endowed with unparallel amazing natural beauty all around as far as your sight goes which is main attraction among tourists worldwide. Wide spread lush green meadows and gentles slopes of huge mountains ornamented with Oak Pine and birch trees, innumerable species of rare flowers and herbs, chirping of birds, rushing and gushing of many water streams making beautiful water fountains on their way and presence of the splendid Gangotri greater Himalayan range mix a overwhelming fragrance in the whole atmosphere of Chopta. Sun rise and Sun set view from Chopta is an unforgettable event especially from Chandrashila peak in winters. View of The Greater Himalaya from an ideal distance is one of major attractions which inspire tourists to visit Chopta frequently.

It is extremely challenging to climb Chandrashila peak above temple region because of its steepness and huge amount of snow on route. But with proper snow gears, equipment and with experienced instructors one can enjoy elevation of Chandrashila peak. A huge amount of snow remains up to March end in Chopta region. It is bit difficult to access above Tungnath temple in January and February but becomes easier in March.

GEOGRAPHY OF CHOPTA :-Chopta is about to 200 km drive along with the rivers such as GANGA, ALAKNANDA, and MANDAKINI one by one form Rishikesh. A link road (recently declared national highway), at 2700 metre elevation, passes through Chopta region and connects Alaknanda (Badrinath) and Mandakini (Kedarnath) valleys. Chopta’s  accessibility is very easy from both valleys side but Mandakini side is nearer and is used by most of the tourists in all seasons. In snow fall season this link road remains closed from December to March so in snow season tourists arrive Chopta only via Mandakini (Kedar) valley. Now because of NH Government is planning to keep the road open from both valley sides in snow season as well.

SEASONS OF CHOPTA :-Not only every season but every passing month has its incredible impact on Chopta region’s whole environment. Rain is essential part of Chopta region to fulfill Jungle’s huge water demand, since it might rain here at any time, any week and any month of the year. There are mainly 6 seasons in Chopta that anyone can observe easily like spring, summer, rainy, pre-winter, winter including snow fall. In Chopta, every season has its own colour, fragrance, feel, movement and beauty which keep changing month to month and season to season. In spring season fragrance of Rhododendron flowers fill the whole atmosphere of Chopta because 20% of the forest is occupied by Rhododendron trees. Summer season brings greenery, flowers and lots of tourists in Chopta valley. April, May and June are best time to visit Chopta for all age tourists because temperature remains gentle and weather mild. Dense fog envelopes the entire Chopta region in July and August for two months. Usually advent of snow fall season is expected after mid December and lasts up to mid March but sometimes it might extend its time period.

FLORA AND FAUNA IN CHOPTA:-As Chopta is part of Kedarnath wild life sanctuary so it is obvious that there is abundance of plants and animals all around. There are more than 251 species of birds (migrant plus permanent), about 100 species of mammals, 45 species of giant trees and innumerable species of flowers and insects. Many species of plants and animals of them are in the verge of extinction like Musk dear, snow leopard, Monal, vultures, Thuner, Paapri, Ghinaroo etc. Many scientists and students come to Chopta to study its divers and unique flora-fauna. Once forest department had made a Musk dear sanctuary in Copta to protect and breed Musk dear but it was in vain.